Giants Have Fun and Compete Well at Loyola Flight Night

The Highland Park Cross Country Team competed for the first time in the Loyola Academy Flight Night. The atmosphere was electric and the competition was fierce. The Giants were ready to rise to the occasion and have fun doing so. The meet had music blasting and the varsity flights were run in the dark under the athletic facility lights. It was not a very fast course, but quality times were run by the team.

In the frosh-soph race, sophomore Robby Mendoza led the way. This was another strong race for Mendoza as he ran 19:09.6 for 3 miles. The next four HP runners were freshmen. Josh Brown and Henry Gamson ran close throughout the race and came through the last 400 side by side to both finish in 19:20.3. Brown continues to have consistent quality races and Gamson had a nice breakthrough race to finish the closest he has to Brown. Moss Roberts was with the duo through the first mile before falling back. He still ran well with a 19:43.9. Logan Liu has been another bright spot for the freshman and battled to a 20:30.7. This was 1:14 faster than what he ran in Peoria for 3 miles.

Sophomore Mateo Diaz has shown significant improvement this season. He ran 1:19 faster than he did in Peoria to finish in 20:43.7. Freshmen Harvey Hayes and Emmit Boxer raced together throughout the 3 miles. They pushed each other to 21:02.4 and 21:03.7. They both ran much faster than in Peoria. For Hayes it was a 1:35 improvement and for Boxer it was 1:43.

Three sophomores were the next HP finishers. Charlie Ludington ran well to finish in 21:36.0. He did not have any teammates right by him, but battled with the competitors around him. Luke Byrnes had a big breakthrough race. He was 3:10 faster than what he ran for 3 miles in Peoria! He also beat numerous runners he had never been ahead of before. He finished in 22:10.3. Logan Berghoff ran his best 3 mile race, crossing the line in 22:24.7. Freshman Gal Raviv was just .2 behind Berghoff. Raviv raced 2:35 faster than his race in Peoria.

Sophomores Lincoln Seidman and Gavin Flory pushed each other throughout the race and battled to the finish. Seidman had the faster kick to cross the line in 22:41.9. He finished 2:23 faster than he did in Peoria. This was the first 3 mile race of the season for Flory and he finished in 22:43.0. Great efforts for two sprinter/field event guys.

Sophomore Sean Bell used a strong kick to move past freshman teammate Noah Carson in the final 400. Bell finished in 24:59.6 while Carson came in at 25:02.4. This was the first 3 mile race for Bell. For Carson, this race was 1:27 faster than what he ran in Peoria. Sophomore Henry Suh ran an impressive 2:45 faster than what he raced in Peoria. He crossed the line in 27:09.4.

The frosh-soph had a lot of fun racing and showed how much all of their hard work has been paying. They have made significant improvement and look to have their best races coming up these next 2 weeks.

In the Open race, junior Zach Coren got out fast and put himself in great position. He battled tough for a 7th place finish in 17:36.0. This was a nice bounce back race for Coren after being sick recently. Four more juniors made up the rest of the top 5 for HP. Nolan Schott had a great last mile and final 400 to just miss a top 10 finish in 11th place. He ran 17:43.3. Not far behind him was Eli Neiman. He placed 15th with a strong final 400 as well. Connor Edelstein was next in, taking 18th place. He ran tough, crossing the line 18:14.1. Oliver Baterdene has been having a good season and ran 19:28.3. He finished in 19:28.3.

Four seniors came in next for the Giants. Enrique Lipezker had a very strong sprint finish to run 19:36.6. Davide Albiani was another runner coming back from illness. He ran a solid 19:59.0 after never breaking 20 minutes last year. Andrew Arzac came across the line next in a 20:27.0 after having a 22:52 personal best from last season. Ramey Heimgartner also ran in the 20s. He finished in 20:43.0 to be ahead of his personal best from last season.

Three more juniors rounded out the competition for HP. Eddy Picazo battled through a hip injury to run 20:53.8. Tyler Rosenthal was 37 seconds faster than what he ran in Peoria. He crossed the line in 20:57.0. Ryan Griffith got out well and ended up running 22:53.6 which is still well ahead of his personal best from last season.

Highland Park placed 2nd as a team in the open race. Coren earned a medal with his top 10 finish. The first two races got the varsity runners hyped to have great races as well. 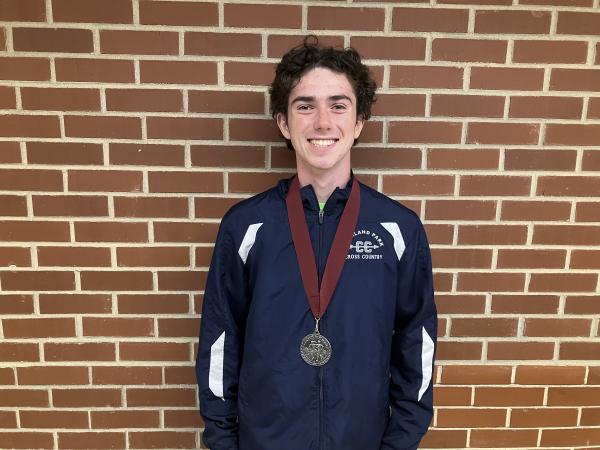 The varsity races were divided into two flights. The first flight was each team’s 6-10 runners and the second flight consisted of the 1-5 runners from each team.

In the first flight, sophomore Usiel Rodriguez and junior Robert Oboza got out together for the first mile. Junior Doug Anderson was not far behind. After this trio, sophomores Dylan Dominguez and Brian Hatoum paired up to race together through most of the 3 miles. At the 2 mile Rodriguez and Oboza were still right together and racing very well. Anderson had faded back a bit, but was still having a solid race. In the final mine, Rodriguez moved ahead of Oboza. He finished in 16:55.4 which is just a few seconds off his best time. Oboza came in at 17:10.7. Dominguez had a tremendous last mile and was just 2 seconds back in 17:12.1. Anderson had a fast last 400 to get across the line in 17:16.8. Hatoum also finished well as he came in at 17:22.3. Each of the guys in this flight raced extremely tough and had their best final 400s of the season.

Flight two got out fast and junior Nate Wehner was right up with the leaders. He even took the lead at the 2 mile for a short time. He was unable to hold on as he ended up finishing in 3rd place with a 15:34.4. Sophomore Barak Goldstein put together his best race of the season. He capped off his race with a 68 second last 400 to run a personal best 3 mile time of 15:59.8. He finished in 12th place overall. Senior Noah Jackson also had a great race. He ran a 16:11.6 to take 19th place in the meet. Next in for the Giants was senior Angel Zeferino. He battled tough like he always does and came in with a 16:38.2 good enough for 35th place. Senior Alex Bradshaw had his best race of the season and fastest 3 mile time. He finished in 16:47.4. It was nice to have the guys starting to run their best races as the end of the season nears.

The varsity team took 3rd place and had 3 medal winners. Wehner, Goldstein, and Jackson all earned medals by their strong performances. This was a fun meet and a nice step in the right direction for the team. Hopefully, a sign of things to come down the final stretch of the season. 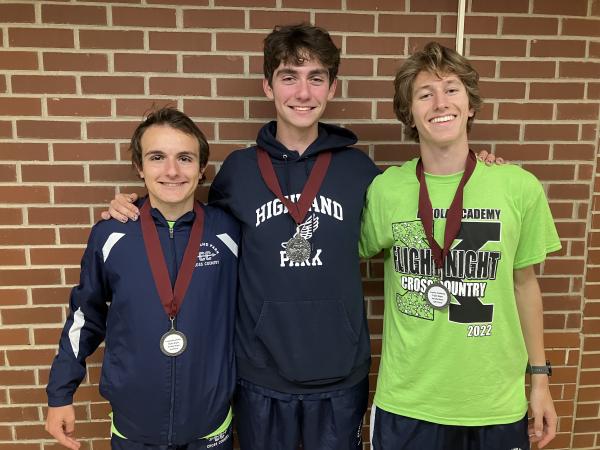