HP Varsity Loses By 2 Points to Deerfield in Quad Meet

It turned out to be a crazy schedule for the teams involved in the CSL quad meet hosted by Deerfield High School. It was first scheduled for Tuesday. After trying to move things along and combine some races, the meet got canceled due to lightning. The meet was then moved to the next day, but everyone was informed midday Wednesday that Maine West could not get buses so it was changed again. Finally, the meet happened on Thursday with varsity going first.

HP has not beaten Deerfield in a quad meet for the last few years and was looking to get the win against a tough DF team. The Giants got out well showing that they were ready to compete. Junior Nate Wehner pulled away early by pushing the pace hard despite having no other runners that went with him. It was another win for Wehner with a new personal best 15:10.5 to finish 24 seconds ahead of 2nd place. 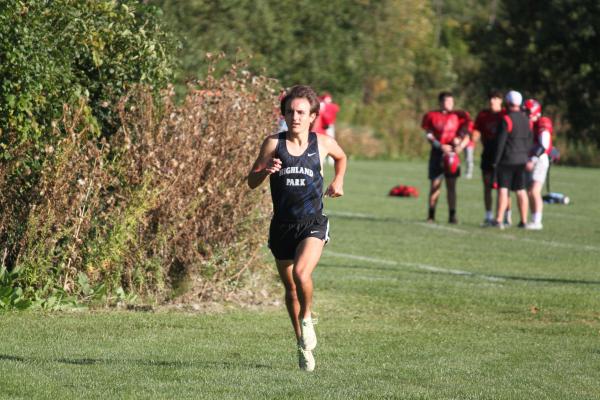 After Wehner, the team needed to rely on pack running to match Deerfields depth. Junior Barak Goldstein and seniors Noah Jackson and Angel Zeferino went with the front runners of the chase pack. They had plenty of company with a few Vernon Hills runners and several Deerfield runners. Jackson and Goldstein battled tough to stay with the top 2 Vernon Hills and Deerfield runners as they started to pull away. Unfortunately, they were not able to stay with them and finished in 6th and 7th overall. Jackson ran 15:57.7 and Goldstein was at 16:01.2. Zeferino ran a gutsy race as he was fighting through a knee injury, but refused to give up because his team needed him. He was in good position until the final 400. He was unable to hold off two Deerfield runners, but still ran 16:13.8 for 10th place. This trio of HP runners each knows that the team will need more from them at the conference meet. 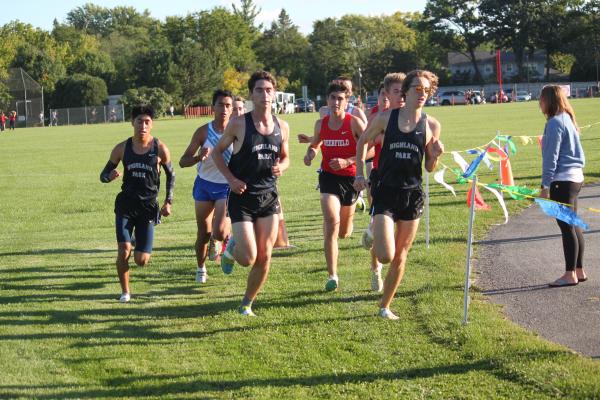 At this point, both DF and HP had their top 4 runners across the line. Juniors Lukaas Nales and Doug Anderson would need to use their great track speed to hopefully get by some DF runners. Despite tremendous efforts by both Giants, they only got by one DF runner and were just behind 2 more. Nales came in 13th (16:27.5) and Anderson was 14th (16:28.8). 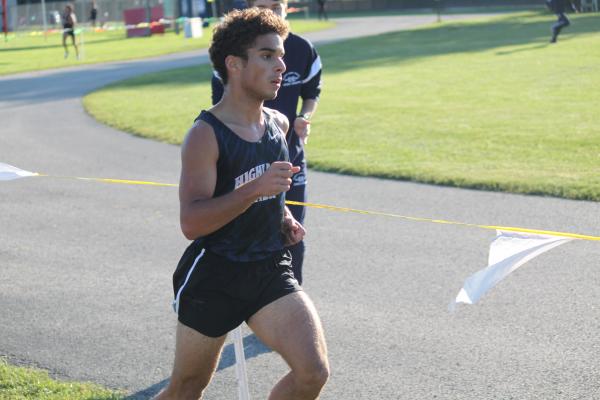 Sophomore Dylan Dominguez put forth another impressive effort with a 16:39.9 for 19th place. He was the team’s 7th man at this meet.

Sophomore Usiel Rodrigez and juniors Yonatan Garfinkel and Robert Oboza were also under 17 minutes. Garfinkel has been having a wonderful season with another great race to finish in 16:43.4. Despite running a personal best time, Rodriguez was not up where he usually finishes for the team. Oboza has been an awesome addition to the team and continues to improve each week. He finished in a personal best 16:55.2.

Coming off illness, junior Zach Coren ran a solid 18:00.2. This was still 45 seconds faster than his best time from last year. Junior Oliver Baterdene and sophomore Robby Mendoza both had great races and also finished in the 18s. Baterdene crossed the line in 18:45.6 after only running 20:29 last year. Mendoza came in at 18:54.5 to improve on his 19:56 from last season. Both runners have been putting together some impressive racing the last few meets. 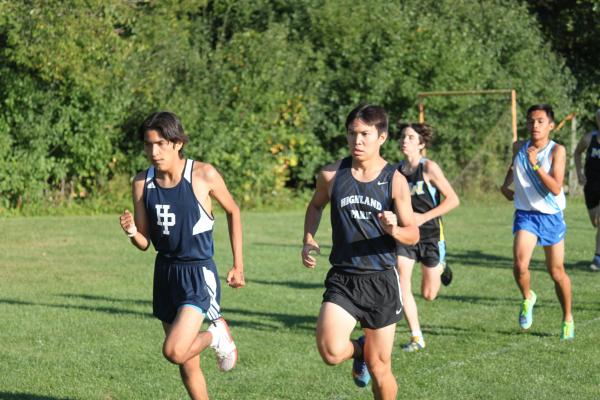 Senior Enrique Lipezker was the only HP runner in the 19s. He raced to a personal best time of 19:16.3. The next 4 Giant finishers were all in the 20’s and each ran personal best 3 mile times. Junior Tyler Rosenthal ran 20:12 and will look to get sub 20 the next time the team races on a fast course. Senior Andrew Arzac had a big race to finish in 20:27.5. Last year, his best time was only 22:52! Another senior running well was Ramey Heimgartner. He finished in a personal best time of 20:36. 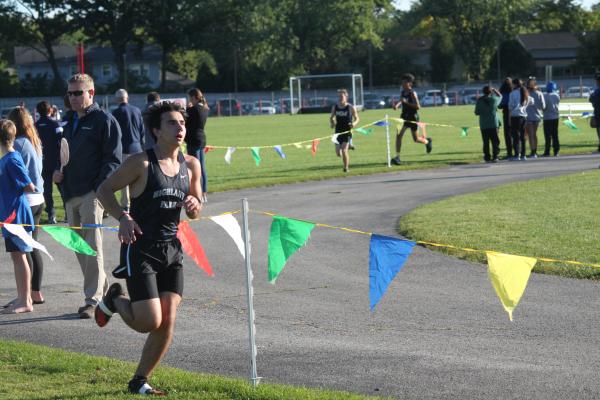 Junior Ryan Griffith got out very well in the first mile, but faded in the next two. He still ran a huge personal best to finish in 21:58.8. His best time last year was 27:04!

Senior Marco Schulze has shown tremendous improvement this season. He ran a big time 3 mile personal best of 22:35.3. Last year, he only ran 24:20 as his best time! He has been working hard which shows in his times.

Despite all of the great efforts and personal best times, the Giants fell short of beating Deerfield by just 2 POINTS (29-27).  This goes to show the importance that each guy on the team has. There were so many close races with DF kids that could have turned this meet around if an HP runner was able to get in front of them. On this day, the team gave it their all but were unable to get the job done. Hopefully, the outcome will be different at the conference meet. HP did beat Vernon Hills again (23-36) and also beat Maine West (15-50).

Highland Park once again ran mostly freshmen in the frosh-soph race at this quad meet with the top 7 all being frosh. The Giants all ran personal best times and competed at a high level.

Daniel Doyle took a risk and got out hard with the leaders early in the race. He faded a bit and ended up racing with teammates Josh Brown during the second mile. Brown was a bit behind Doyle with 400 to go, but finished right with him at the line. Both runners finished with a time of 11:57.8 for 2 miles for 7th and 8th place. Having two sub 12 front runners for these freshmen makes them a really strong team. Henry Gamson and Moss Roberts were together for the first mile until Gamson pulled away in the second mile. He ended up finishing in 13th place at 12:18.6. Roberts had his usual strong sprint finish to take 16th place in 12:29.7. Logan Liu has been starting to close the gap on the top four. He had another strong race to take 19th place in 12:51.3. That makes the top 5 all sub 13 with only a :54 gap. 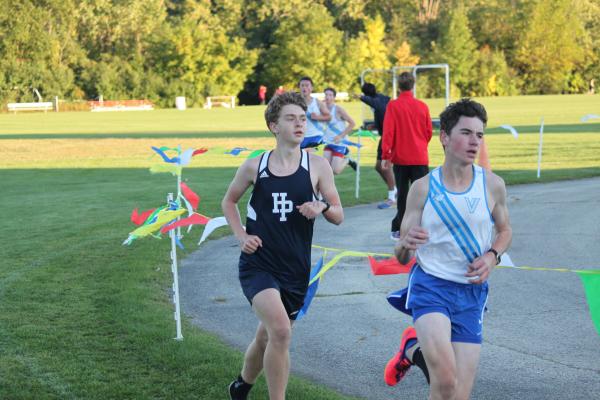 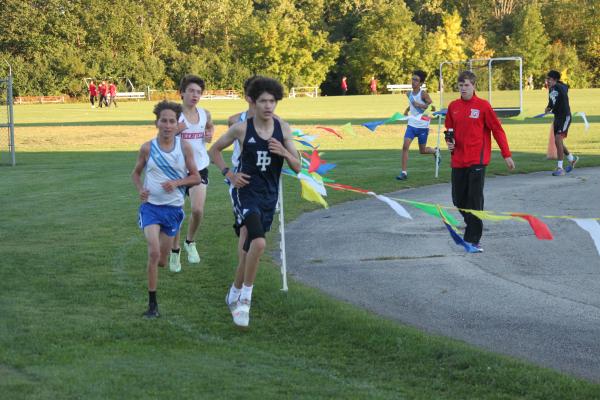 Lowell Redmond and Emmit Boxer were the important 6th and 7th runners for the Giants. Redmond continues to be running extremely well and showing big time improvement. He finished in 22nd place with a time of 13:21.8. This is just over 6:40 per mile pace. His timed mile in August was 7:54! Boxer was coming off being sick and ran a tough race to take 23rd just behind Redmond. His time was 13:23.9. With these two running so well, it gives the Giants 7 freshmen under 14 minutes and a 1:26 1-7 gap. 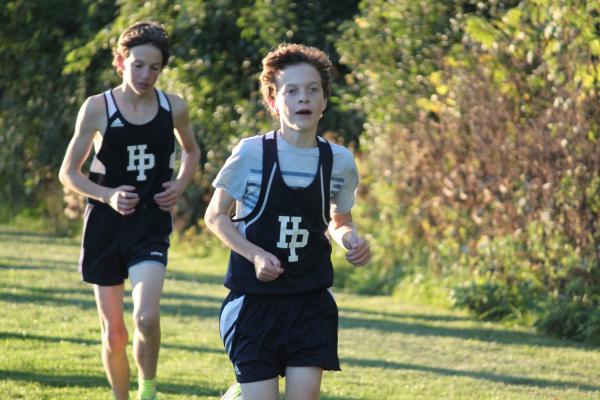 Sophomore Logan Berghoff has been struggling through shin issues all season. He refuses to let that stop him from giving it all he has in races. He ran a tough 14:00.2 with a tremendous battle to the finish line to beat a runner from Vernon Hills by .1 at the line. 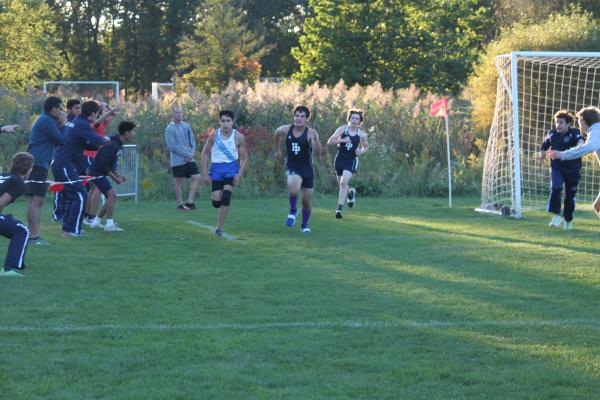 Freshman Gal Raviv and sophomore Lincoln Siedman were close together for most of the race. In the end, Raviv ran 14:07.2 and Seidman finished in 14:11.2. These were strong races by both runners as they averaged a pace per mile slightly faster than their August timed mile.

Sophomore Luke Byrnes had a fantastic race. He got out fast and battled tough throughout the race. His final time was 15:05.3. This is just over 7:32 pace per mile. In August he ran his timed mile in only 7:44! Freshman Noah Carson also had a great race. He finished with a determined kick to get 15:21.6 for two miles. For him, it was about 7:40 per mile pace compared to the August timed mile he ran in 8:15! These two HP runners have continued to show how much hard work pays off during their first season. 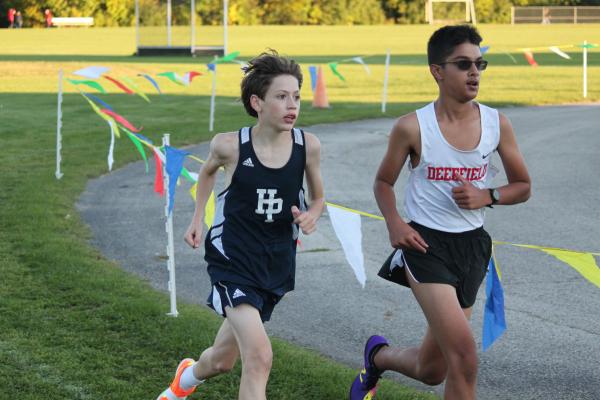 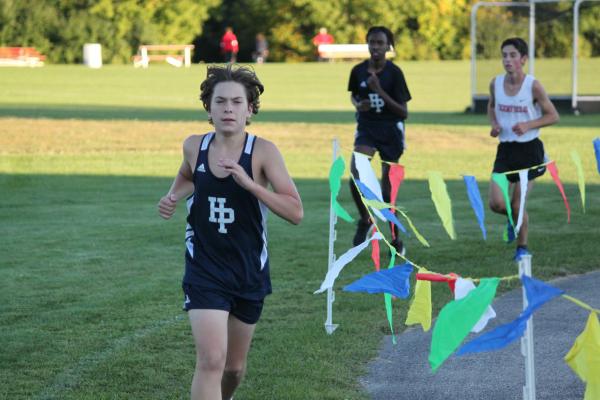 Freshmen Landon Perez and Sean Bell worked well together in the first mile. Perez was able to pull away in the 2nd mile to finish in 15:43.5 for his first high school cross country race. Bell battled to a finishing time of 15:51.4 for 2 miles.

The frosh/soph lost to Deerfield and Vernon Hills, but beat Maine West. The Giants know that they will have an opportunity to be one of the top CSL North freshmen teams at the conference meet in a few weeks. That is if they continue to stay committed and work hard together.