The CSL Invite was hosted by Glenbrook South on their fast flat course on this windy Saturday. The Giants were feeling confident as they have worked hard all season to get to the conference meet healthy, fit, and ready to compete.

The freshmen 2 mile race got out fast as 5 of the 9 HP freshmen competing went through the mile in a personal best for that distance! Alex Bradshaw, Noah Apley, and Noah Jackson were leading the way for the team. Bradshaw was with a kid from Vernon Hills battling for the individual title in the CSL North Division. In the end Bradshaw took 2nd in an impressive 11:16.02 and was less than a second behind 1st place. 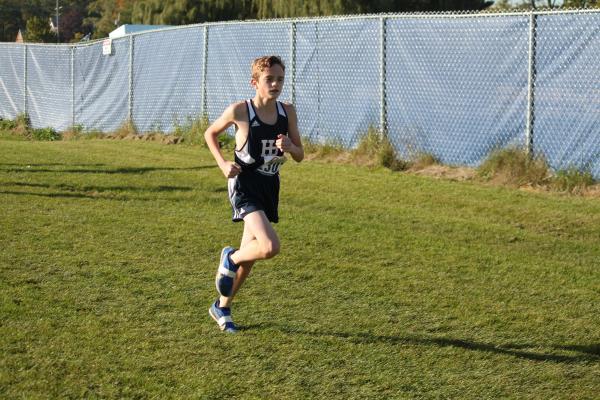 Jackson held off a runner from Deerfield to finish in 11:31.1 for 4th place. Apley, despite not being able to run much this week due to a hip injury, ran a gutsy race to take 7th place in 11:36.05. 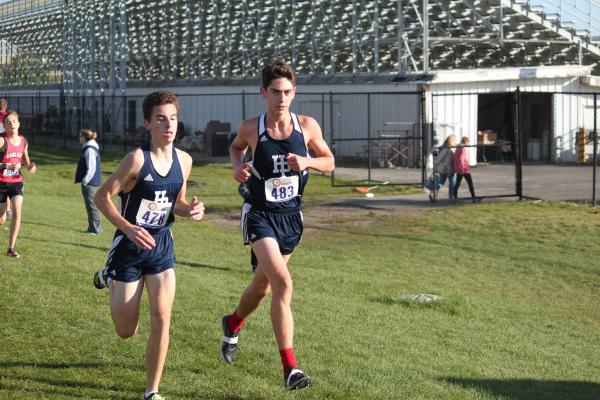 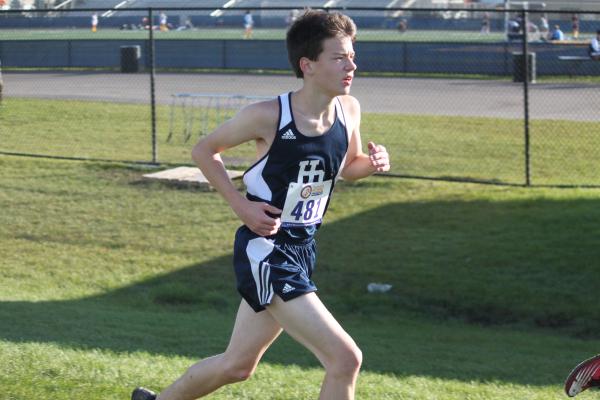 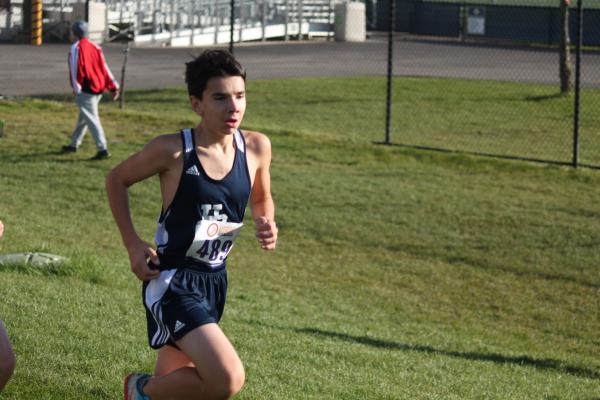 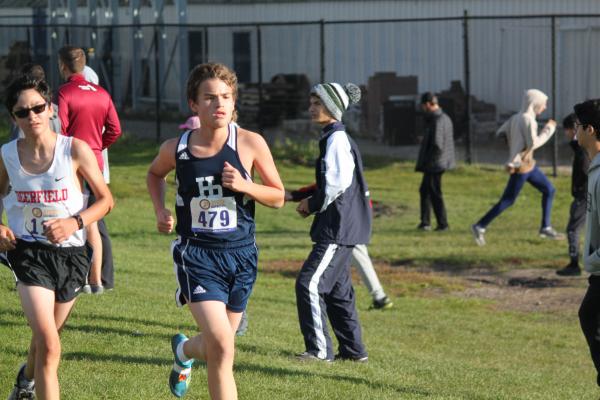 Ramey Heimgartner got out in his fastest mile (8:02) and battled tough to finish in 16:48.59. This was a strong team performance led by Bradshaw, Jackson, and Apley. HP ended up in second place with 51 points as Deerfield scored 44 points to win the team championship for the CSL North. This group of freshmen (along with the ones that did not compete in this race) have come a long way and have done a tremendous job working hard and embracing the team culture. They have a very bright future if each of these great kids continues to work hard throughout the year to be the best distance runners they can be. That means training through the winter, competing on the track team, training as a team over the summer, and building on this success in the cross country season to follow. 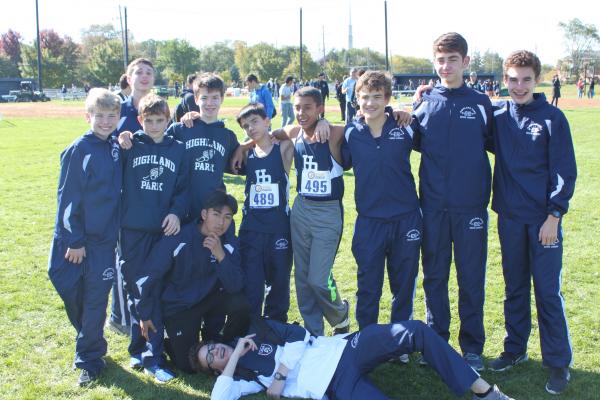 The varsity 3 mile race was next and the team knew it needed to have its best race to beat a very strong and hard working Deerfield team. Junior Jason Polydoris got out with a large back of runners from the CSL South Division and stuck with them throughout a majority of the race. Maine South’s top runner and race favorite pulled ahead during the last mile. Polydoris closed extremely well in the last 400 as he moved into 2nd place, but was passed by two runners that he eventually passed back to take 2nd overall and 1st in the North Division. His time of 15:16.48 was nearly 30 seconds ahead of the next CSL North finisher. 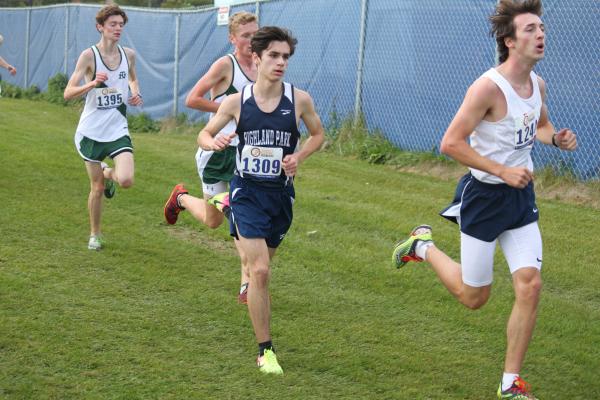 Senior Corey Fairchild continued his successful season as he had another personal best for 3 miles running 16:02.8. He battled tough to nearly beat Deerfield’s number 2 and 3 runners. Fairchild ended up taking 6th place for All-Conference in the North Division. 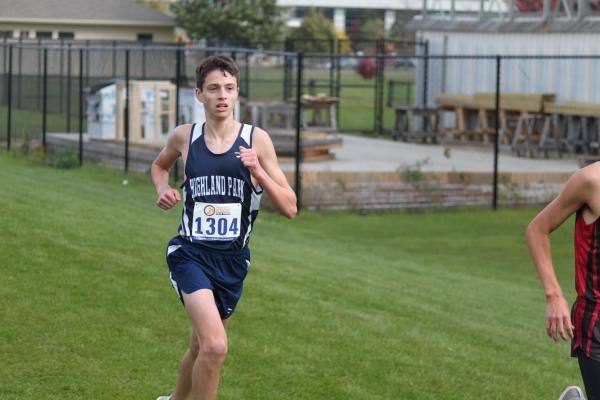 Sophomore Alex Brown had his best race of the season finishing is 7th place with a time of 16:23.16. This earned him All-Conference honors for the second time after taking 13th as a freshman. 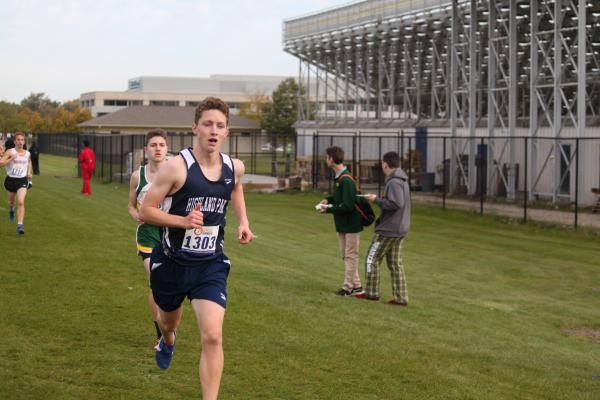 In his first Invite in several weeks, junior Erik Anderson battled tough to finish in 16th place with a time of 17:04.48. Junior Max Friedman and senior Max Marmitt raced together to take 20th and 21st (17:16.43 and 17:16.68). Junior Jason Werneth came across the line in 17:31.57 to take 26th. This was not the overall team race needed to win a conference championship as Deerfield took the title in impressive fashion and HP was 2nd. The work Deerfield put in this past summer was a major factor in their success this season and in the inability of the Giants to match their performance and team depth. The team will need a much better performance at the IHSA Regional if they hope to advance to Sectionals. In addition, those returning next year must raise the bar when it comes to their level of commitment to this program and their own personal dedication to being the best runner they can be. 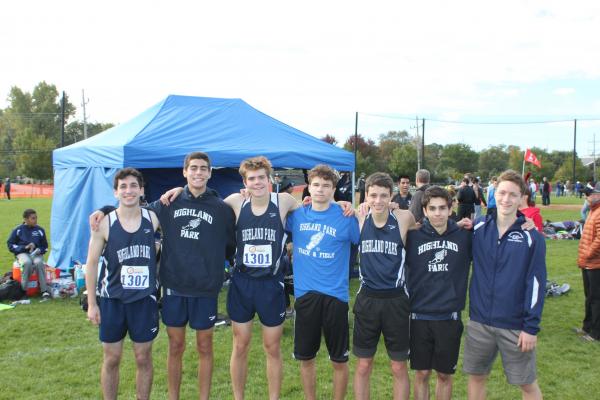 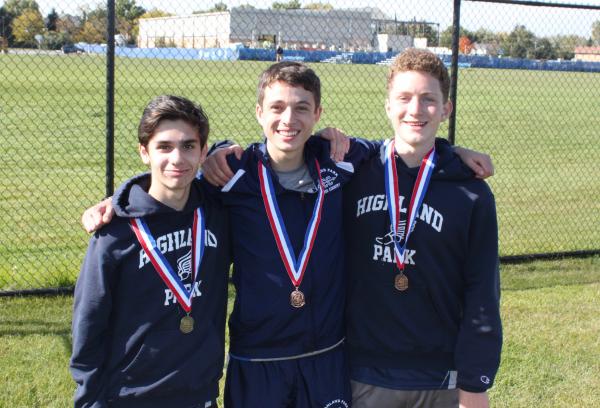 The sophomore 3 mile race included HP freshmen Angel Zeferino as he needed to run in a 3 mile race to try and earn a spot in the top 7. Zeferino and Alejandro Seiden worked together throughout the race and Seiden got out faster than he ever has. The two battled to finish in 3rd and 4th in the CSL North as Seiden ran a huge personal best of 17:18. His previous best was 18:33! Zeferino also ran a personal best finishing in 17:23.79. 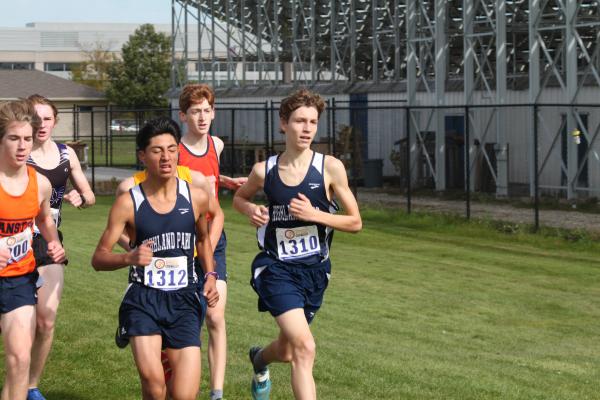 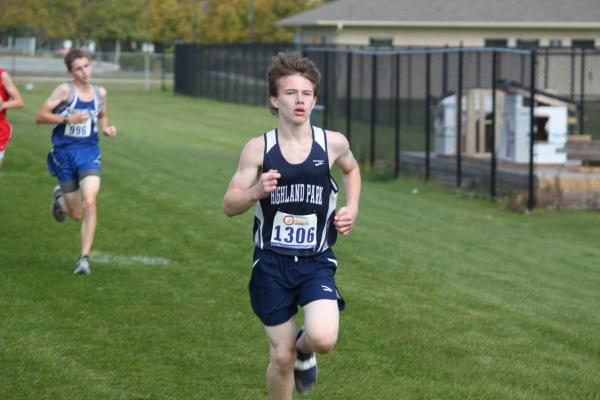 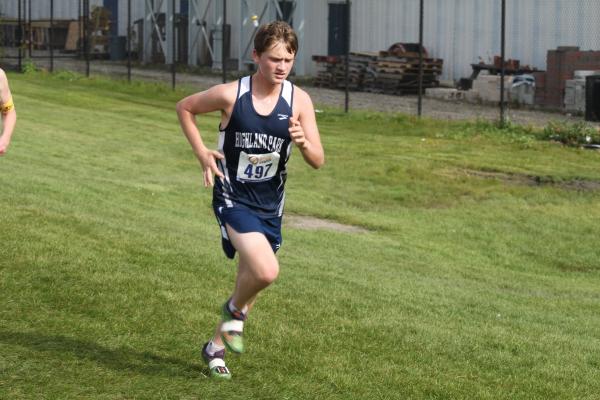 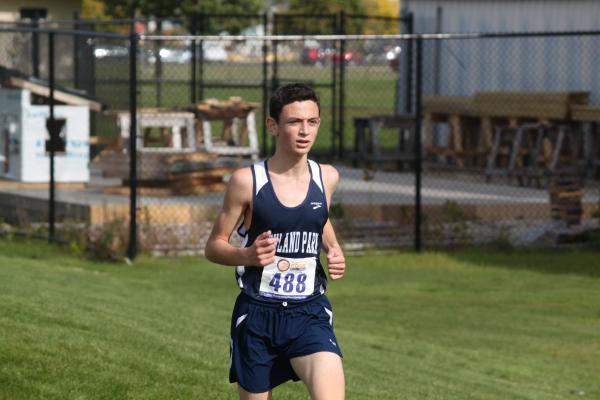 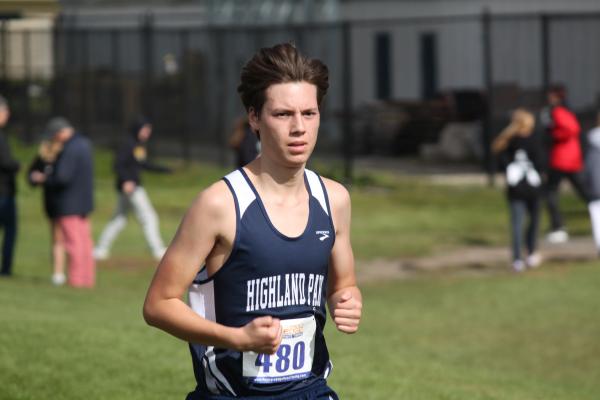 Ethan Nicolaz-Davidson ran his best 3 mile time of the season (26:06.55) despite being sick the previous week. This group of sophomores along with Zeferino was tied for 2nd in the CSL North but finished 3rd based on the 6th man tie-breaker. These young runners can make a huge positive difference on the future success of the program if they continue to work hard and commit to being the best distance runners they can be. They must continue to raise the bar! 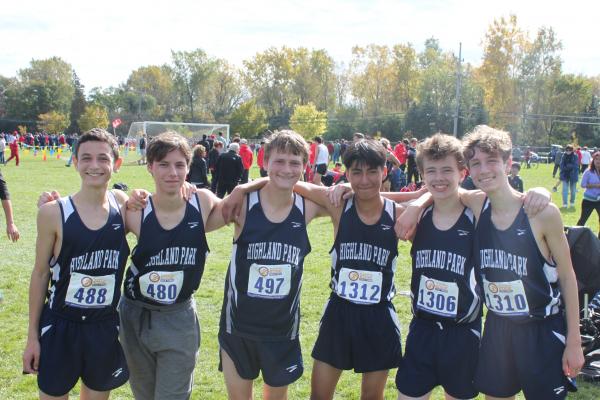 The final race of the day was the JV 3 mile race. Senior Dylan Pearson got out extremely fast in the first 400. After settling into his pace, Pearson ran a great race to finish with an over one minute personal best of 17:29.89 to take 7th place in the North Division. 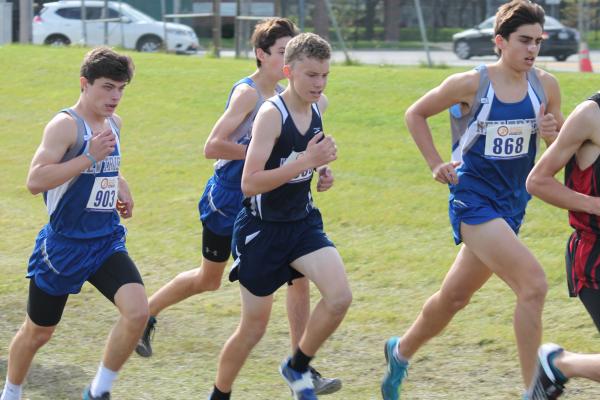 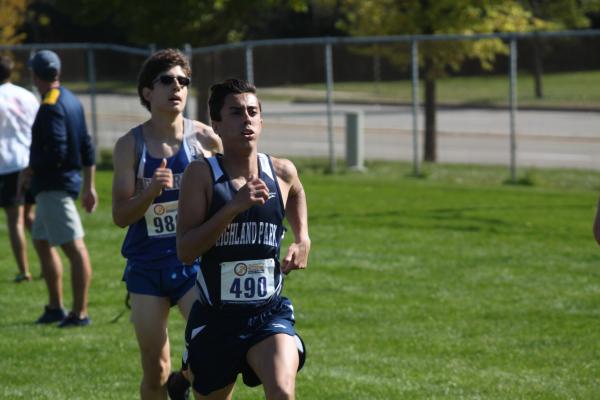 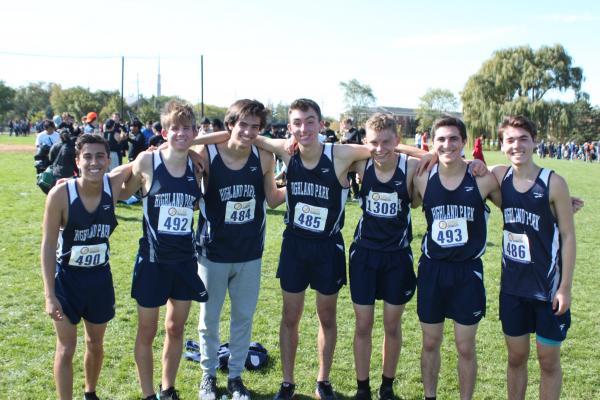 The team’s young runners showed the future of the program looks promising. The returning varsity runners know that they have to raise the bar to compete for a team championship next year. The seniors are greatly appreciated for all they have done to contribute to the program’s success. The entire team now needs to support the varsity as they embark on the 2019 IHSA State Series. Go Giants!