The Giants competed in their first outdoor meet of the 2022 season vs. Evanston and Loyola at Evanston High School. This meet was supposed to be at HP, but due to expected thunderstorms, it was moved a day earlier to the Evanston track. With great competition, this meet allowed the team to see some of their strengths for the outdoor season and where they need to improve.

HP is continuing to find guys that can help with the team’s depth in the field events.

The long jumpers were led by sophomore Oliver Baterdene’s 2nd place performance. He jumped 17’ 4.75” in his first meet competing in this event. Senior Peter Soutsos jumped 17’3” for 3rd place. Freshman Quentin Kelley had a big improvement from his best indoor mark by taking 4th with a 17’2” jump. His best indoors was 15’11”. Sophomore Tyler Rosenthal jumped 16’4.75” for 5th place. Junior Christian Billetdeaux continues to show great improvement as he went 16’ 0.5”. His indoor best was only 14’6”. Freshman Adam Cohen was coming off injury and jumped 14’6” while freshman Austin Colegio had a 2” personal best jump of 13’11”.

Kelley came back with another big personal best in the triple jump going 35’6” for 3rd place. Colegio also had another personal best with a 30’1” jump. The other HP triple jumpers had no marks, but worked on taking some risks and learned how to adjust to jumping outdoors.

Billetdeaux and sophomore Dmitry Derbedyenyev both cleared 4’11.75” in the high jump.

Evanston did not have a pole vault pit set up outside, so the vault was contested inside. HP was led by freshman Dylan Dominguez and his 2nd place finish while clearing 8’0”. Juniors Enrique Lipezker and Diego Alvarez tied for 3rd place clearing 6’11.75”. Junior Geoff Buck cleared his first height of the season getting over 6’ while freshman Adam also cleared 6’.

On the track, the events began with the 4X100 meter relay. Several of the Giant relay members had to do a quick warm-up after getting off the bus that was late getting to the meet. The frosh-soph relay had a significant lead before dropping the baton on the 2nd exchange. The team of freshmen Tyler DePaolo, Quentin Kelley, and sophomores Zach Liss and Eddy Picazo still ended up running a :53.39. The varsity team of sophomore Malachi Calliste, junior Darius Robinson, senior RJ Guhl, and sophomore Lukaas Nales ran very well and finished in :44.95. This quartet of sprinters just missed earning a spot on the HPHS all-time top 10 for this event by less than 1 second. The 10th time is currently :44.54.

HP had 3 competitors in the 110 meter high hurdles. Senior Peter Soutsos came in 2nd place with a personal best time of 16.55. This was his first time going under 17 seconds. Junior Finn Davis raced to a 19.85 time while sophomore Oliver Baterdene ran a 20.79.

In the 100 meter dash, the Giants had a very good start to the outdoor season with some fast times. The team was led by junior Paul Eam with a personal best 12.09. Billetdeaux has really started to show the kind of speed he is capable of delivering as he ran a 12.36. After being injured much of the indoor season, freshman Sam Kee had a really nice first 100 meter race with a 12.57. The next 3 fastest times for HP were all freshmen. Lincoln Seidman ran 12.68 with Dylan Dominguez right behind him in 12.69 followed by DePaolo in 12.7. Sophomore Tyler Rosenthal ran a personal best time of 12.78 with freshman Liam McKenzie right behind him in 12.79. Freshman Dylan Daniels continues to show improvement with a solid 13.26. Junior Geoff Buck crossed the line in 13.28 with sophomore Ethan Seligman close behind in 13.48. Junior Diego Alvarez raced to a 13.61 with Austin Colegio coming across the line in 14.79. The race showed some nice depth for our sprinters even without all of the sprinters running the 100.

Sophomores Nate Wehner and Barak Goldstein finished 2nd and 3rd in the 800 meter run with times of  2:03.73 and 2:06.01. Their times will drop with experience and continued harder workouts. Seniors Ethan Nicolaz-Davidson and Marco Schulze had a tight race against one another to finish in 3:09.39 and 3:09.66. 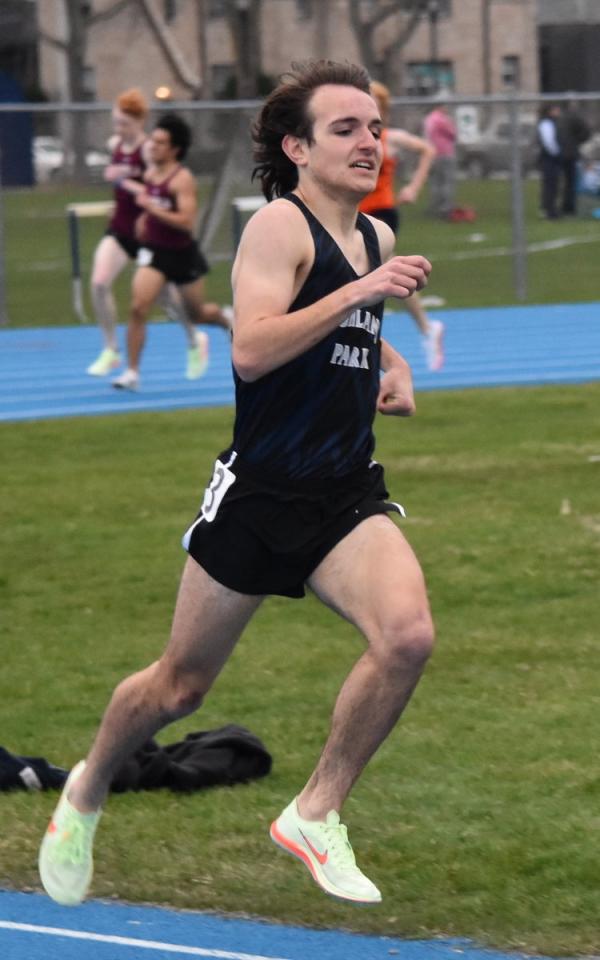 The frosh-soph 4X200 meter relay team had a solid race finishing in 1:43.93. The team consisted of Kee, Seidman, Liss, and Picazo. The varsity relay took first place with a 1:36.85. Their team had Calliste, Robinson, Guhl, and Nales (with another strong anchor leg). 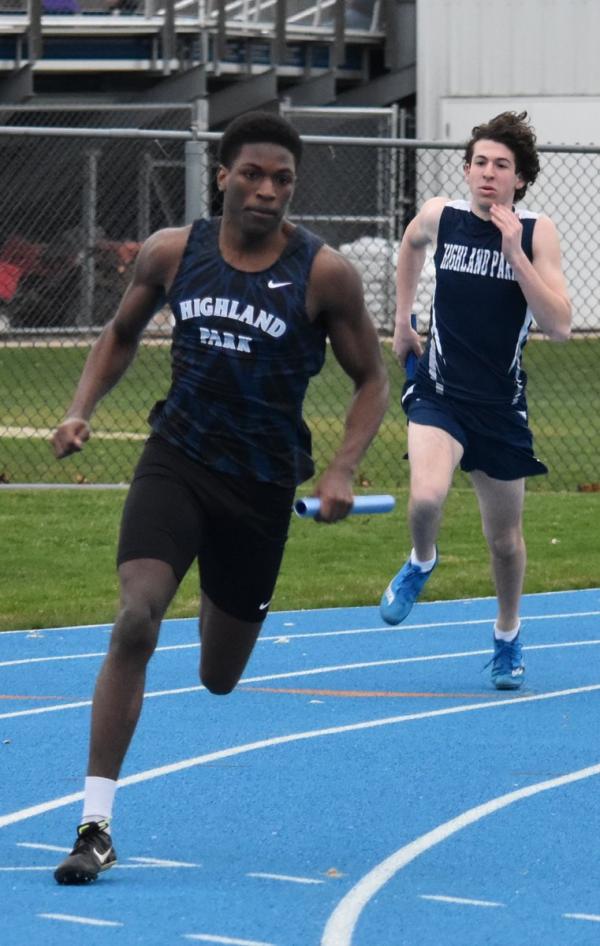 In the 1600 meter run, junior Noah Jackson had a strong race to take second place running a 4:45.83. Freshman Carter Livermore had a big personal best with a fast final lap to take 3rd place in 4:48.92. Zeferino came back from the 3200 to run a 5:11.23. Sophomores Yonatan Garfinkel and Nolan Schott had a great battle together to take 1st and 2nd in their heat (9th and 10th overall). Garfinkel held off a late charging Schott to run 5:17.44 while Schott ran 5:18.12. Rodriguez and Hatoum doubled back form the 4X800 to run 5:26.59 and 5:32.37. Charlie Ludington battled at the front of his heat despite losing one of his shoes early on the first lap. He still raced hard and crossed the line in a personal best 5:49.47. Sophomore Ryan Griffith put himself in great position early in the race, but fell off the pace in the second half. He still tied his personal best with a 6:12.82. Freshman Mason Zoeller ran a solid 6:26.34 while junior Ramey Heimgartner raced to a personal best 4:28.06. 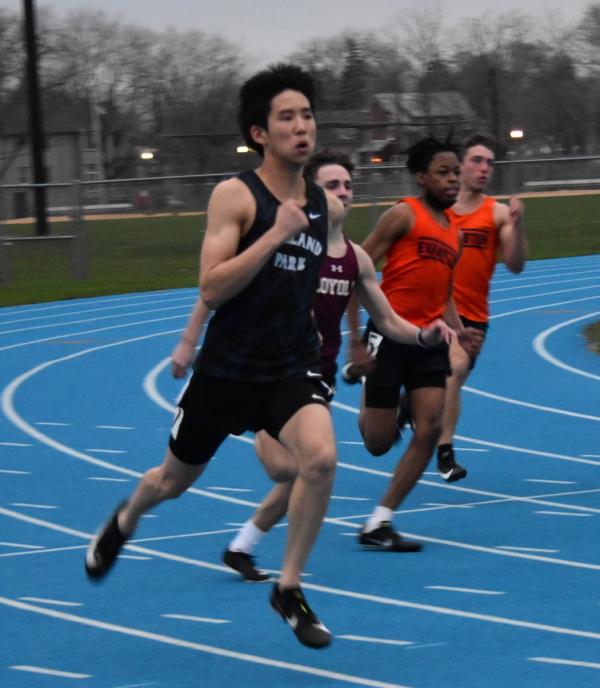 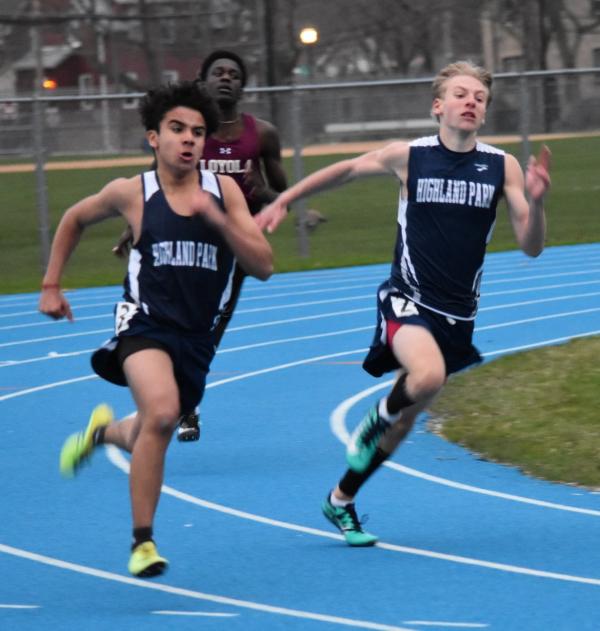 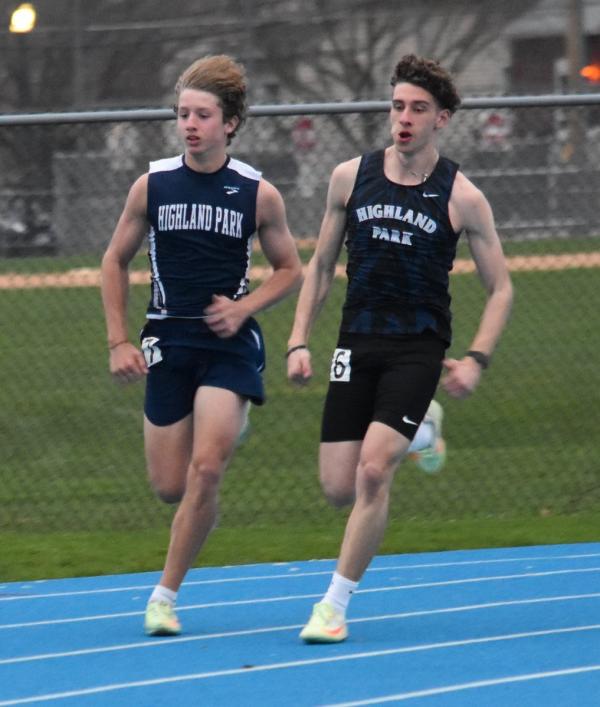 The 4X400 meter relay continued to deliver exciting performances by HP! The team had 3 relays entered. Hatoum led off his relay with a 1:07.3. Dominguez was put in at the last minute and ran an impressive :57.2 split. Rodriguez had another personal best on the day with a 1:01.3 split. Zeferino anchored in a 1:05.1 to complete 3.25 miles of racing on the day. The team ran 4:10.8. The second team had Coren lead off in a 1:00.4 followed by Kelley going :59.2. Edelstein ran a solid 1:01.1 while Livermore showed his speed by splitting a :57.3. This team ran 3:57.94. The third relay battled up front with a great lead off leg by Wehner in :55.8. Jackson was the next leg and ran a personal best :55.1. After getting the baton from Jackson, Guhl battled to keep the team in it by running a :55.3 personal best. Nales ran his third anchor leg of the day and delivered an incredible performance. He was behind by a couple seconds and focused on catching the leader from Evanston. Down the final stretch, Nales pushed himself to get past the Evanston runner for the victory in a :50.1 split! The team ran its fastest time of the season with a 3:36.5. 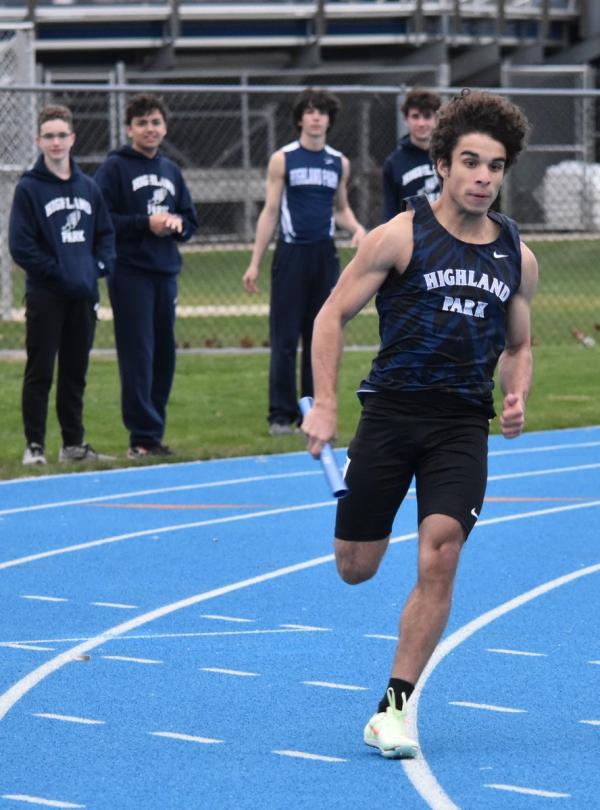 This meet was a very nice start to the outdoor season for the Giants. It consisted of many breakthrough performances. The coaching staff is excited to keep progressing towards getting the entire team to be at its best in mid to late May. Each guy on the team will need to do his part by showing up everyday with a positive attitude and ready to work while trusting the process. Giant success still to come for this team!


The nominations for Giant of the Meet included:

Charlie Ludington - He ran a gutsy 1600 meter run PR despite losing his shoe near the start of the race. Strong battle with another run down the final stretch.

Lukaas Nales - He anchored the 4X100, 4X200, and 4X400 all to fast times. He stepped up to help the team be successful. He showed tremendous grit and determination in each race. His 4X400 anchor split was an incredible :50.1 to earn the relay 1st place and a season best time.