Highland Park showed great improvement as a team this indoor season. Despite an overall young team, the Giants coaching staff put together the best lineup they could to try and win a conference championship. The team competed with heart and determination at the CSL Invite hosted by Maine East.

Having a good start in the field events is a key part to winning a team championship. Overall, HP had a good performance in the field events.  There were definitely several events that the team needed to be able to score more points in.

The shot put was highlighted by sophomore Larry Jenkins winning the frosh-soph event with a huge personal best. He threw 39’1.75” which was a nearly 5 foot improvement! The team will need Jenkins to keep putting in the work to improve and eventually help score big points on the varsity level. Look for him to be over 40’ this outdoor season. Sophomore Jon Bacci just missed his personal best by a few inches as he threw 20’2.5”. Varsity did not perform as well. Junior Colin Chase threw 34’4.5” while sophomore Dmitry Derbedyenyev was at 31’4.5”. Look for much improved performances by both of these throwers during the outdoor season.

The pole vault is an event that the team needs to get some points out of. Due to injury and several guys being out of town, only one HP athlete competed in the event. Junior Geoff Buck was unable to clear a height, but has been putting in the hard work to get some stronger performances outdoors.

The long jump was the field event in which HP had the most success. On the frosh-soph level, sophomore Tyler Rosenthal took 2nd place with a 17’.25” jump. This missed his personal best by a few inches. Freshman Quentin Kelley got 6th place going 15’3.5”. Varsity was able to get even more points as HP went 2-3 in the event. Sophomore Malachi Calliste tied his personal best with a 20’2.25” jump to take 2nd. Junior Darius Robinson had a personal best in the event going 19’8.5” to finish in 3rd place. HP has not had two long jumpers over 20 feet in a long time.

Freshman Dylan Daniels took 7th place in the frosh-soph high jump. He cleared 4’6” just missing his personal best by 1 inch. On varsity, Derbedyenyev competed in the event for the first time. He cleared 5’6.25” to take 3rd place in the event. This was the kind of unexpected performance that a team needs more of to win a championship. Junior Christian Billetdeaux had an off day and did not clear a height, but continues to show great potential in the high jump as well as the sprints. 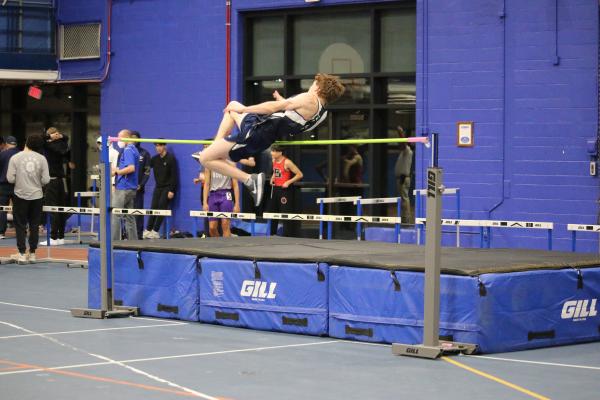 On the track, the meet began with the 4X800 meter relay. Once again, due to injury and team members not being present, no frosh-soph 4X800 was available to compete. On varsity, the team had put together a relay that did not include the top 800 runners on the team. Senior Ted Zinox (2:27.8) led off and kept the team close to Maine West to battle for 4th and 5th place. Junior Ramey Heimgartner (2:48.8) got out well, but was unable to hold the pace and fell behind the 4th place team. Senior sprinter Josh Longo (2:43.0) was asked to compete in this event to help the team despite never having run an 800 before. Due to a last minute injury to junior Enrique Lipizker, junior Geoff Buck (2:56.4) was asked to take his place. The team finished in 5th place to score a point for the Giants.

In the frosh-soph 3200 meter run, freshmen Mason Zoeller (13:13.12) and sophomore Ryan Griffith (14:05.02) took 5th and 6th place. Both these distance runners have improved significantly since joining cross country in the fall. On varsity, sophomore Nate Wehner went with a good runner from Niles North until the final few laps. At that point, Wehner pulled away for the win in 9:46.97. Senior Alex Brown (10:53.76) was unable to get into scoring position from the start of the race and finished in 8th place. The team will need more aggressive racing from Brown during the outdoor season to get some needed points. 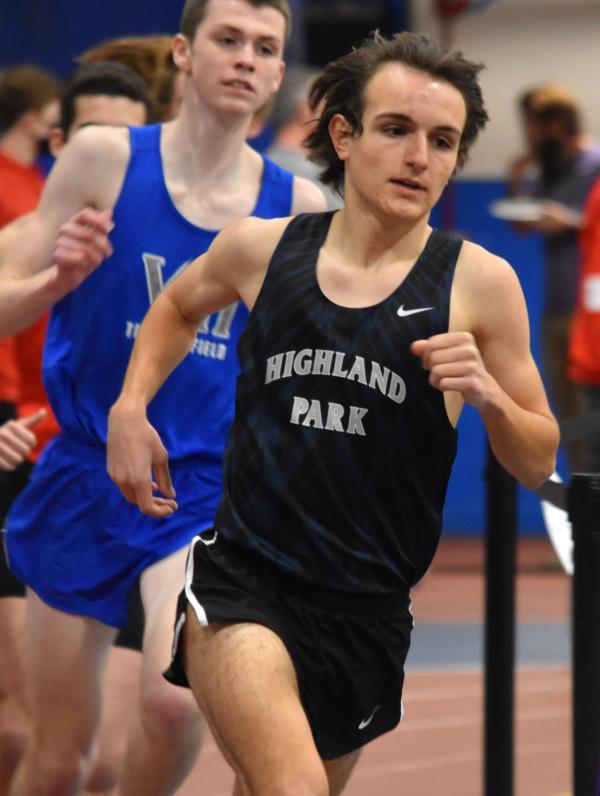 At Maine East, they compete in a 50 yard high hurdle race. Sophomore Oliver Baterdene finished in 5th place in the frosh-soph race with a time of 9.06. On varsity, Soutsos came in 5th place (7.42) while junior Finn Davis was 8th in 8.66. The team is still working to develop more depth in the hurdles.

Sophomore Zach Coren took a risk in the frosh-soph 800 meter run and got out hard with the leader. He was unable to stay with him, but ran a great race to run a huge personal best and take 2nd place. He finished in 2:13.31 and his previous best was 2:18. Sophomore Connor Edelstein also had a strong race to run near his best 800 relay split and finish in 2:22.82 for 6th place. The varsity race was very competitive and sophomore Barak Goldstein raced to a personal best 2:05.44 for 3rd place. Junior Noah Jackson had a solid race to take 6th place in 2:08.3. Big things to come for the team’s 800 crew this outdoor season.

The HP sprint relays have been doing very well this season and that trend continued at the conference meet. Despite some changes in the line-ups of the relays the past few meets, both the frosh-soph and varsity relay teams ran their fastest times at this meet. On frosh-soph, the team took second place overall in 1:23.56 after winning their heat. The team included Baterdene, Picazo, Kelley, and freshman Liam McKenzie. The handoffs were smooth and each guy raced tough. Varsity also took 2nd place after winning the “slower” heat. They ran a season best 1:17.83 just missing the HP all-time top 10 list by just over 1 second. They too had great handoffs and strong runs by each guy. The team consisted of Calliste, Robinson, senior RJ Guhl, and junior Paul Eam (who was put in the day of the meet due to an injury to sophomore Zach Liss).

The frosh-soph 400 meter dash had freshman Sean Lopez just missing his best time, running a 1:05.79 to take 6th place. On varsity, this was an event the team was looking at to get big points. Sophomores Doug Anderson and Lukaas Nales delivered an impressive 1-2 finish for the Giants. Anderson tied his best time running a :52.67 to take the win. Nales fought to get by another runner to take 2nd place in :53.14. The two sophomores got 18 points for the team and helped move HP up in the team standings.

In the frosh-soph 1600 meter run, HP had two freshmen racing and both placing to earn points for the team. Usiel Rodriguez ran a 5:26.10 to take 3rd place. Robby Mendoza had a big personal best racing to a 5:36.5 to finish in 6th place.  On varsity, Wehner had a similar race to the 3200 as he ran with the leader for most of the race before making his big move. In the final few laps, he pulled away to run a winning time of 4:32.85. Freshman Carter Livermore earned a spot in the varsity race and took 7th in 5:00.32. He was unable to get into the position needed to use his strong kick to get points for the team. As this talented runner learns how to better pace and push himself early in races, he will have some major breakthroughs in his racing. 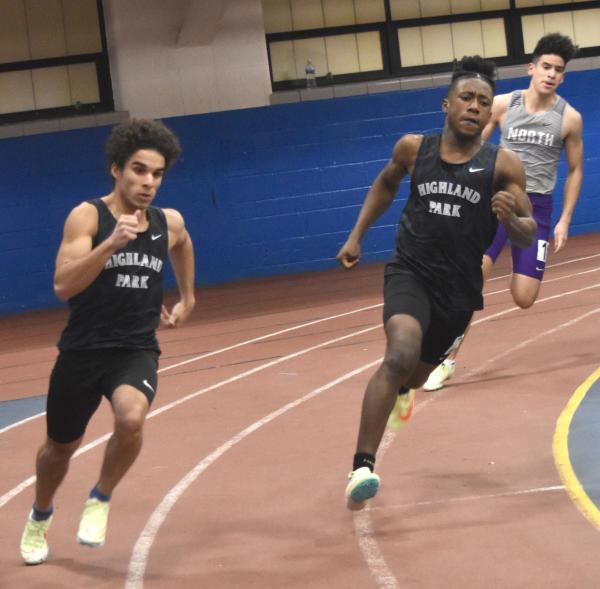 The final event of the day was the 4X400 meter relay. This is another event that HP has been having success in this indoor season. The frosh-soph team battled Maine East throughout the relay. Coren ran another PR leading off with a :58.1. Quentin Kelley got sub 60 for the first time running a :59.4 split. Usiel Rodriguez battled tough to run a PR as well in 1:03.7. Edelstein anchored the team and made a big move to take and hold the lead on the final lap, running a 1:01.5 split. The team finished in 4:03.01. The varsity had a similar race as they battled closely with Niles North. Anderson led off with a strong :54.1. Goldstein raced to a PR split going :55.5. Wehner finished his racing of 32.5 laps running a :56.2 split. Nales completed his challenging triple by digging down deep to get by the Niles North anchor leg off the final turn with an impressive :52.7 split. HP won in 3:38.53 with a new indoor sophomore school record in the event! The old record was 3:43.4 run in 1965. 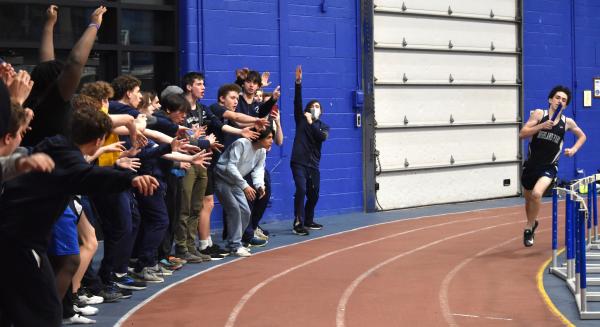 The team finishes were not as good as desired, but the efforts of those that were able to be there and compete were something the coaches and entire team can be proud of. The team will need to stay focused and committed to trusting the process and putting in the work this outdoor season in hopes of winning a championship. There were a lot of things to be excited about from this meet and the entire indoor season.

Zach Coren - He had a great race in the 800 meter run, took a risk and got out with the leader, ended up taking 2nd with a new personal best time of 2:13.31 (previous best was 2:18). He then led off the winning 4X400 meter relay with a personal best :58.1. He continues to demonstrate that consistent hard work pays off.

Larry Jenkins - He won the shot put with a huge personal best of 39'1.75". His previous best was 34'3". He also was supporting his teammates when he was done competing by going around to the different events to cheer them on. He even helped move some mats that got knocked over by the 50 finish and was helping a teammate with his spikes.

Malachi Calliste - He once again did 4 events. He took 3rd in the 50 yard dash. In the 200 meter dash he also took 3rd and just missed the HP sophomore indoor record. He tied his PR in the long jump with a 2nd place finish and led off the 2nd place 4X160 meter relay.

Lukaas Nales - He ran a very tough triple to help the team get points. He took 2nd in the 400 meter dash. Then, came back in the 200 meter dash to finish 5th. With minimal rest between events he joined three other sophomores to run the anchor (:52.7) on the winning 4X400 meter relay that also broke the HP indoor sophomore record.

Doug Anderson - He ran a superb race to win the 400 meter dash in :52.67. He also had another strong lead-off leg in the 4X400 meter relay to help the team win and set the sophomore record.