The Freshman CSL Invite is a great opportunity for the freshmen to compete against their grade level and see how they measure up. The HP team has a talented group of frosh and hoped to make a run at winning the meet. The coaches had to be creative and do what they thought was best to get the most points possible in each event.

The team did not have any freshmen that trained primarily as throwers. Eli Perkins, Adam Slavin, and Julian Chroman competed in the throws at this meet to try and get some points to help the team. They competed well, but were unable to place in the top 6 to earn points. Perkins led the way in both the shot put and discus.

In the long jump, HP showed strong depth in this event. Lincoln Seidman took 3rd with a jump of 18’1.5”. Perkins was second, jumping a personal best 16’10”. Quentin Kelley took 5th in 16’1.15”. The meet only allowed 2 athletes in the event to score, but it was still great that the Giants had 3 jumpers in the top 5! 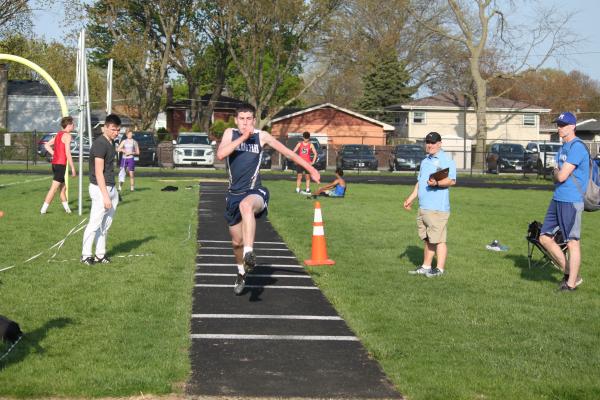 In the high jump, distance runner Carter Livermore was put in to try to score some points. He ended up taking 3rd place at 5’2” while having to warm up for the 3200 meter run. Seidman cleared 4’10” to take 5th place. 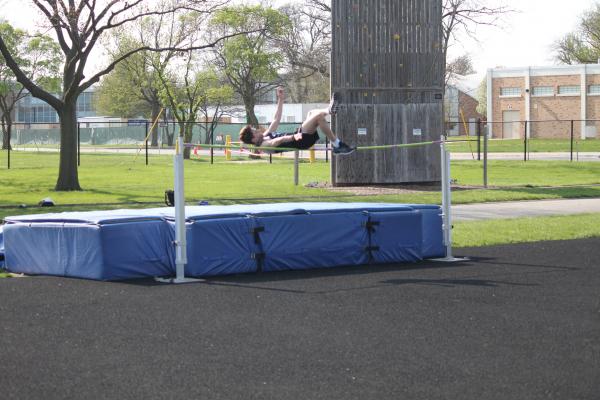 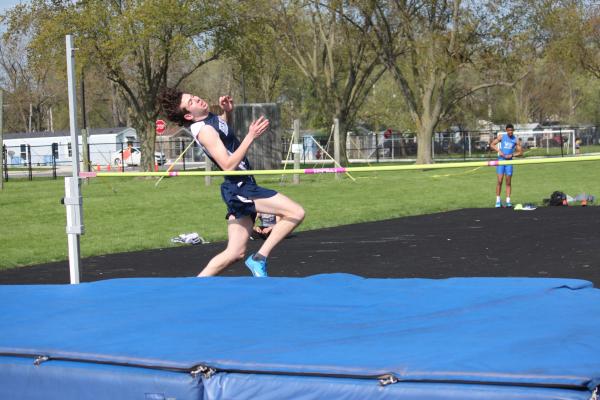 Dylan Dominguez equaled his personal best in the pole vault by clearing 8’6” to take 2nd place in the event. Slavin was able to clear 6’6” to take 6th place. 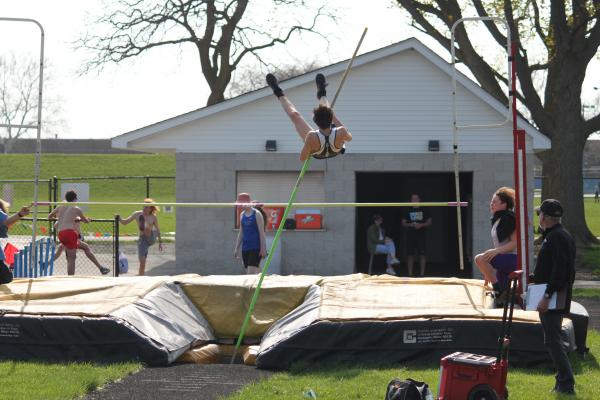 The team got solid points in the field events, but still had to battle tough on track to pull out a victory. 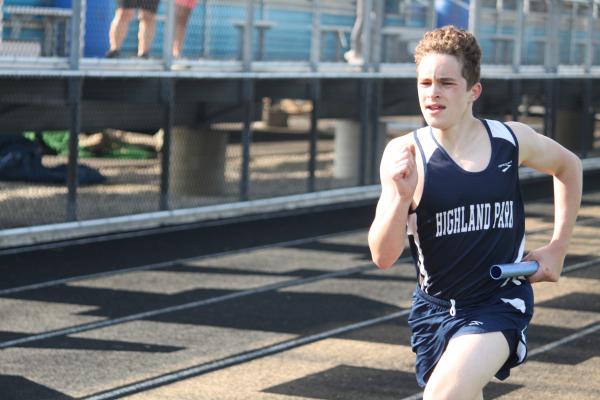 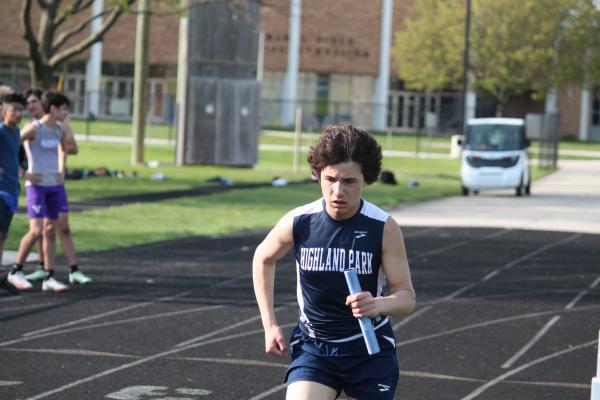 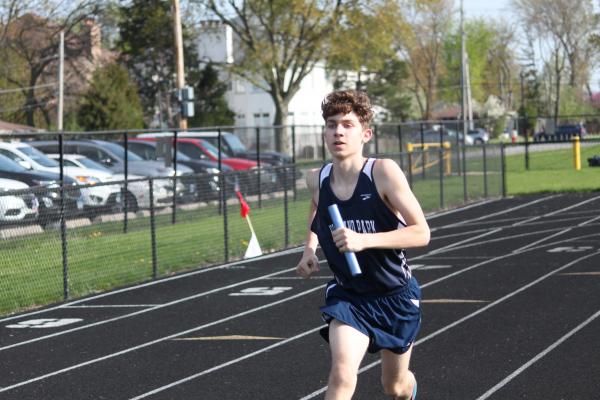 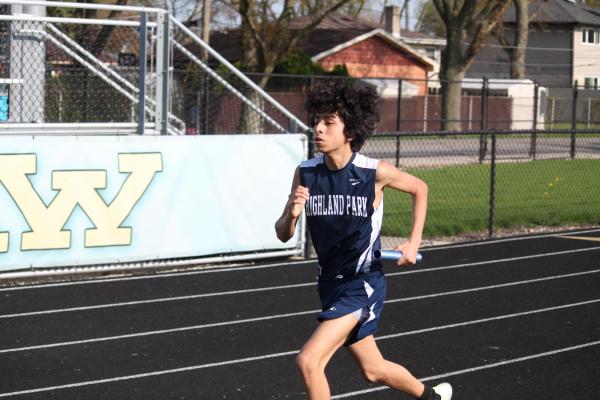 The 4X100 meter relay team ran a season best time for freshmen with a :48.92 to take 3rd place. The team consisted of Tyler DePaolo, Sam Kee, Dominguez, and Liam McKenzie. 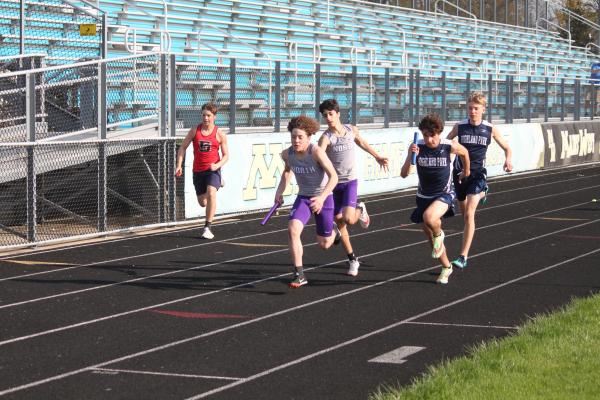 Livermore just finished up the high jump before he had to race the 3200 meter run. He had the fastest seed time by a significant amount. So, in the race he put a big gap on the field in the first mile and then cruised home for the win in 11:21.80. Robby Mendoza had a tougher challenge as he battled with another run until he pulled away with a strong kick at the end to take an important 6th place in 12:55.27. 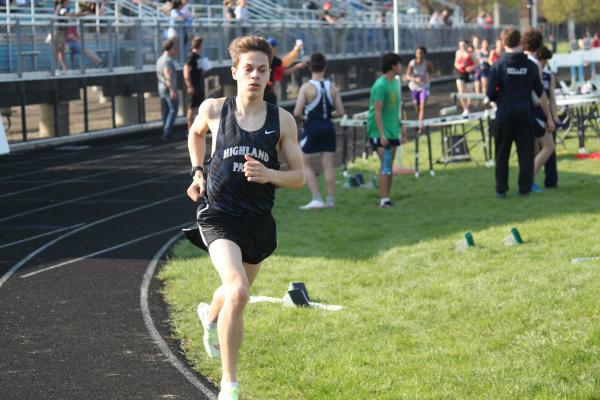 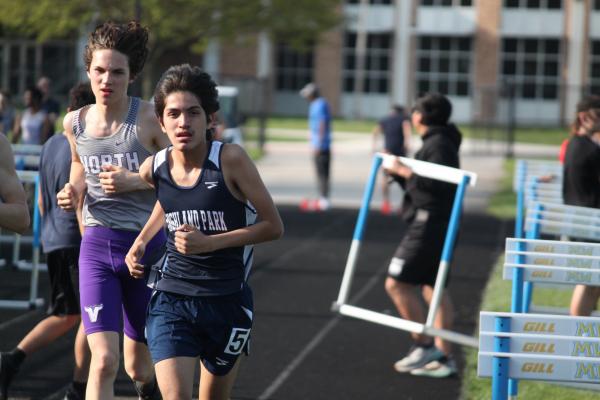 The Giants had no 110 meter high hurdlers. That is an event that they will need to find some athletes to compete in next year. Getting 0 points in this event meant that the team needed to really step up in other events to make up those points. 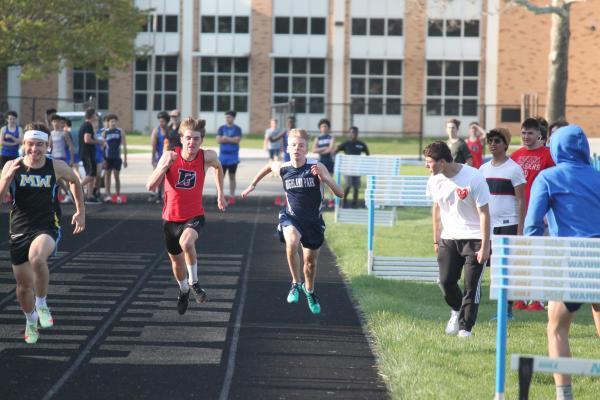 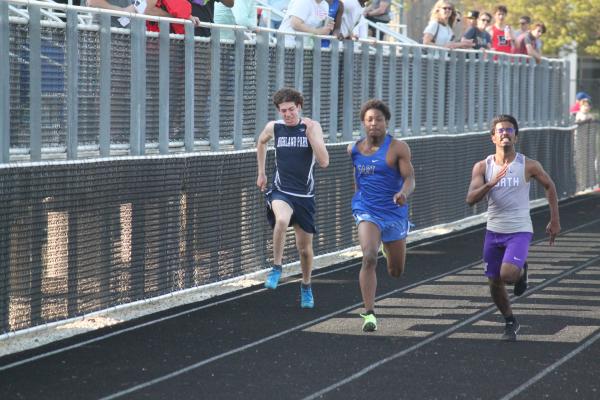 At the 800 meter run, the Giants were down nearly double digits to Niles North and needed to get significant points in each of the final 7 events. Usiel Rodriguez had not run an 800 in a few weeks, but was able to run a 5 second personal best to pull away for 1st place in 2:13.07. Brain Hatoum also ran well and got important points by taking 4th place in 2:24.62. 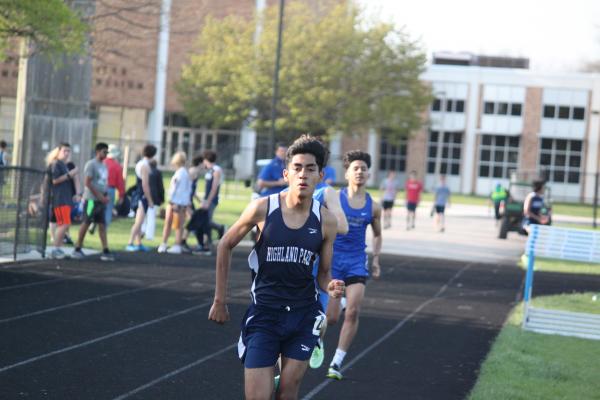 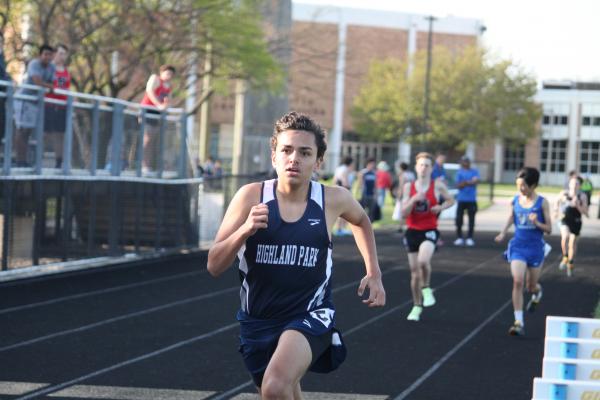 The 4X200 meter relay team of DePaolo, Kee, Cohen, and McKenzie ran well and took 2nd place. They ran a 1:44.2. Cohen stepped in for Quentin Kelley as he was taken out of the relay to run the 400 meter dash. 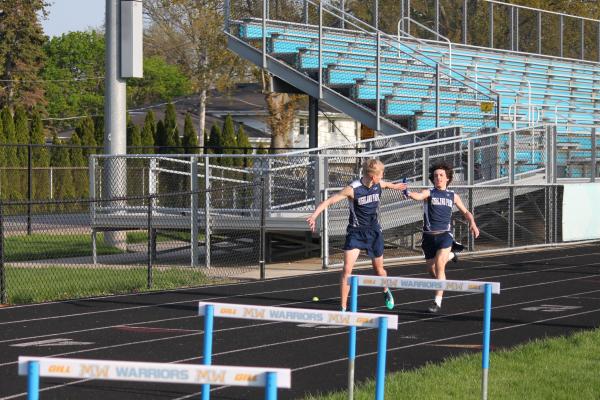 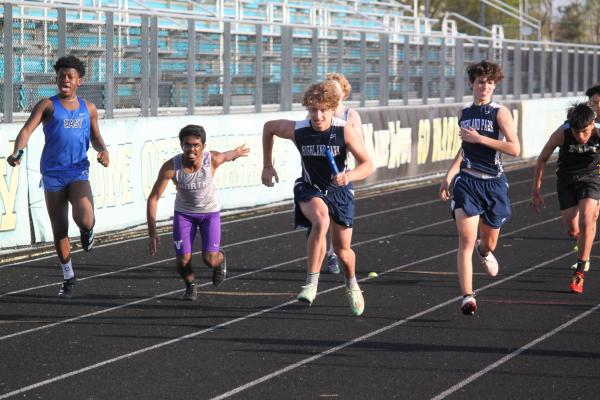 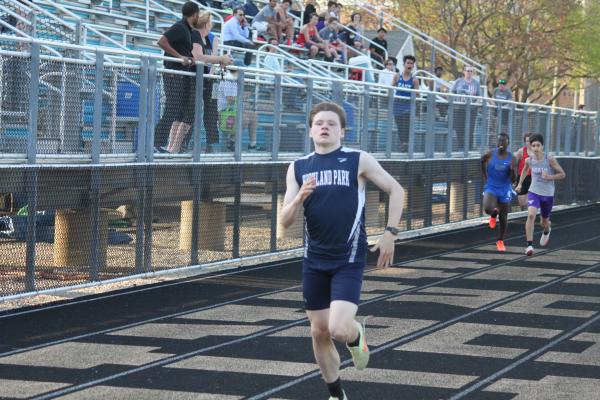 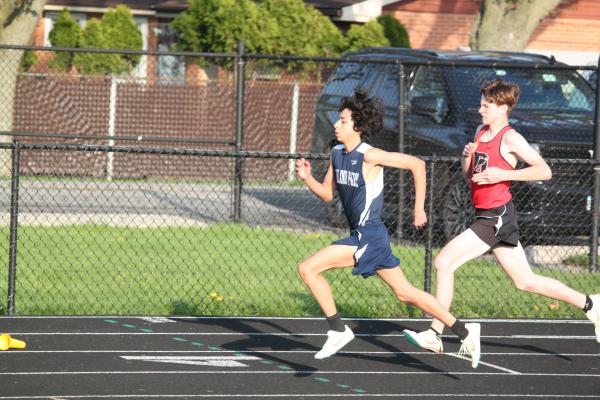 Dominguez had a dominating win in the 300 intermediate hurdles with a :46.12. 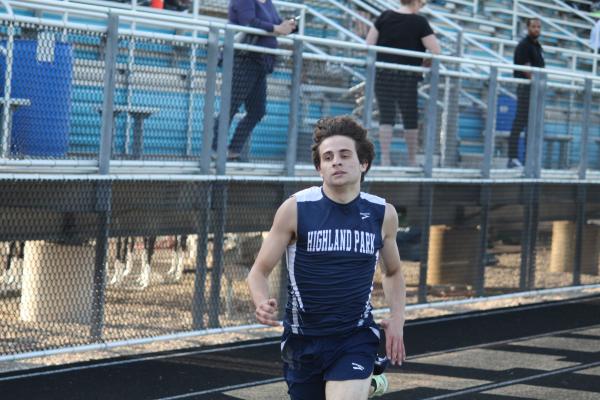 The team score was close with Niles North just ahead of HP. Both teams had two guys that could score points in this event. Livermore and Rodriguez pushed the pace early and pulled away from the pack to go 1-2 and earn a critical 18 points for the team. Livermore won in 4:56.61 while Rodriguez was 2nd in 5:05.89. 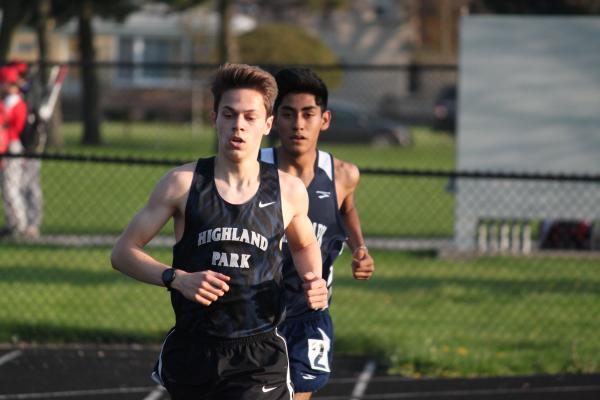 Niles North has a very good sprint crew and the Giants knew they would be tested in the 200 meter dash. Kee stepped up big time to finish in 3rd place with a personal best :25.69. Seidman earned a point for 6th place in :26.86. Both of these athletes were competing in their 4th events of the meet!

Going into the 4X400 meter relay, the Giants were up by 1 point! With four very tired athletes running in the 4X400 (all were on their 3rd or 4th event), they knew they would have to give it their all to ensure the overall team victory. Kelley led off with a :59.8 to give the team the lead. Rodriguez ran 1:01.6 to hold on to the lead. Livermore blasted a :56.1 to extend the lead. Finally, Dominguez grew the lead even more with a :55.5 split. The team ended up winning in 3:52.88 and were ahead by 16 seconds! 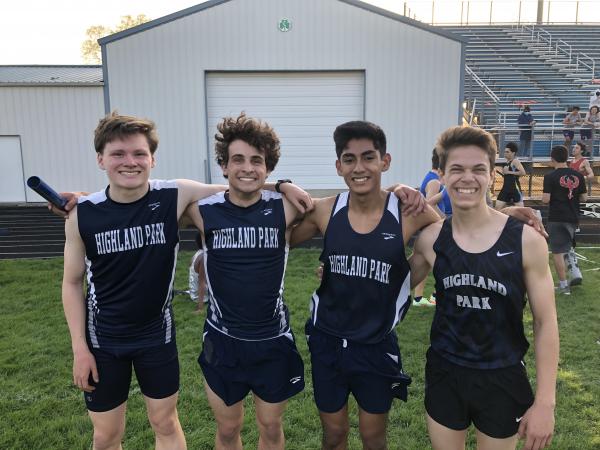 The Giants ended up winning the meet 135 to 138 over Niles North with Deerfield well behind (87) in 3rd. This was a total team effort. Guys were stepping up in so many places to help the team win a close battle with Niles North. This is the 2nd year in a row that HP has won the Freshman CSL North Championship. If all of the team members stick with track & field throughout their high school careers, the team should be winning on the varsity level for years to come. It will take commitment and hard work, but the future looks really bright for HP track & field!

This was such an incredible team effort and each individual performance was key to the team winning the meet. Due to that, the coaching staff decided that all those that competed and helped this team get to the point in which they were capable of winning a championship deserve to be recognized as collective Giants of The Meet. The freshmen will be getting conference champion t-shirts to acknowledge their efforts and accomplishment. 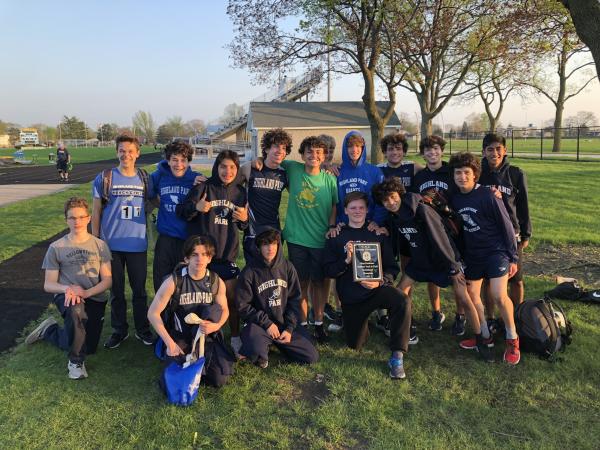 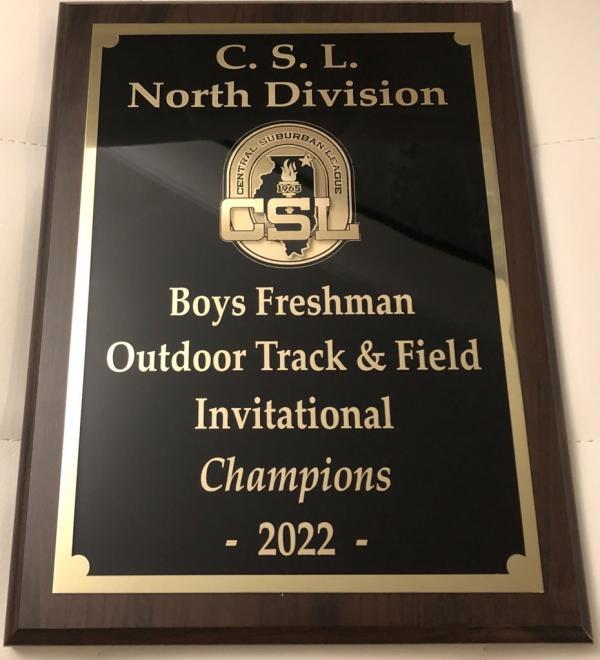