HP Off And Running!

FINALLY! After a cancelled track & field season in the spring, the unknown of if we would even have a cross country season, and the first scheduled meet being postponed until October, the Giants had their first meet of the 2020 XC Season! The meet was a tremendous test for HP as it was a Quad Meet that included two state ranked teams. Deerfield hosted the meet that included HP, Barrington, and Mundelein. Barrington and Deerfield were both ranked in the preseason and they showed why.

The first race was the Frosh-Soph 3 Mile. Highland Park only had four runners in this race because several of the top frosh-soph runners ran in the Varsity Race. Sophomore Noah Apley was the top Giant finisher running 18:00.5 to take 13th place. This was a 24 second personal best. 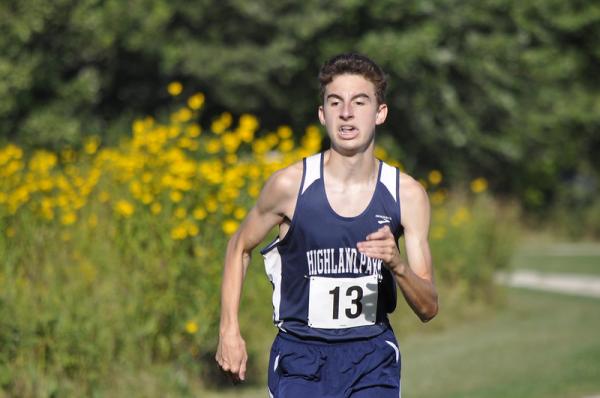 Freshmen Doug Anderson also had a strong showing as he took 22nd place in a personal best 18:42.4. The final two runners for the team were freshmen Nolan Schott and Alex Rosen. They both ran huge personal bests for the 3 mile distance. Schott was 25th in 19:41.3 and Rosen was 26th running 19:47.9. All four HP runners in this race ran extremely well and got the day rolling with some fast times.

The Varsity 3 Mile was the next race. Barrington and Deerfield had very strong teams and the Giants wanted to test themselves against their quality and depth. Senior Jason Polydoris had an individual battle with his rival, Deerfield’s Josh Puyear, who has been having a great start to his season. Puyear led the first mile before Polydoris eventually took the lead and built a small gap. He added about two more seconds to the gap in the final mile as he won in 15:01.2. This was a strong start to the season for Polydoris as he is working to be one of the top runners in Illinois. 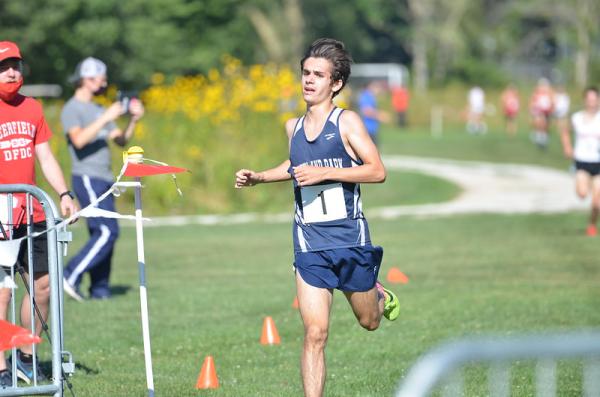 The pack of freshman Nate Wehner, junior Alex Brown, and Senior Erik Anderson had the difficult task of trying to break up Deerfield and Barrington’s deep packs. Wehner ran an incredible race to stay ahead of the 5th Barrington runner and the 4th Deerfield runner. As a freshman, Wehner ran with tremendous poise and toughness. He finished with a very impressive 15:50.0 for 9th place! This is one of the fastest times ever run by an HP freshman. 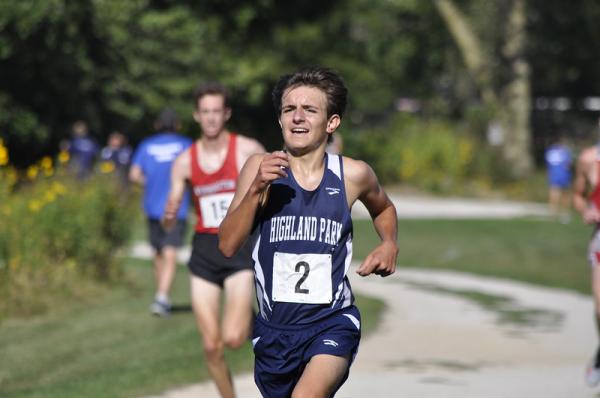 Brown and Anderson battled tough to take 18th and 20th. These times are well ahead of where they started the season last year and Anderson ran an all-time personal best. They both know that they need to be with Nate for the team to be successful this season. The battle for the teams 5th-7th spots was tough with six runners pushing each other for it. In the end, it was sophomore Noah Jackson with a strong last mile that finished next in 17:12.0. This was a huge improvement from his best time last year of 18:59.9! 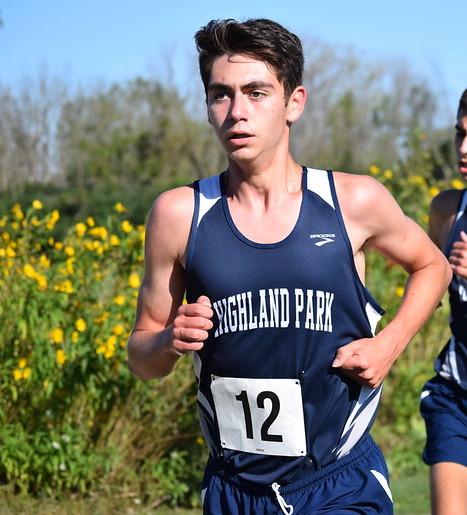 He was followed closely by senior Jason Werneth running well in 17:18.5. The next HP pack fell off the pace a bit, but still ran well for the first meet of the season. Sophomore Alex Bradshaw ran a personal best 17:38.0 (compared to his 18:31.9 best from 2019). Right behind him was senior Max Friedman running 17:42.3 (last year he started the season with an 18:13..74). Sophomore Angel Zeferino had an off race, but still ran one of his best times in 17:49.8. Freshman Barak Goldstein had the goal of breaking 18 minutes in his first race and just missed running an 18:00.4. Still a big personal best with faster times still to come. The varsity showed signs of things to come, but they know they need to race better as a team with the packs being tighter and the 1-5 and 1-7 gaps shrinking.

The Varsity Race was followed by the JV 3 Mile. This is where Barrington and Deerfield really showed their depth. That is something the HP must continue to work on improving. The guys that ran in this race did well and gave great efforts. They were led by junior Alejandro Seiden in 19:11.1. Junior newcomer Shane Horner raced tough in his first cross country race to finish in 19:36.6. 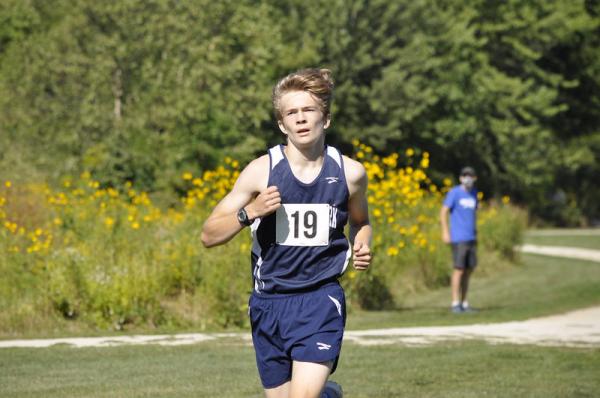 Next up was the first of two Open 2 Mile races. Freshman Lukaas Nales sprinted to the front early and ran a very gutsy race. He battled to the finish behind two juniors and held off a senior down the final stretch to finish in an impressive 11:36.7 for 3rd place. 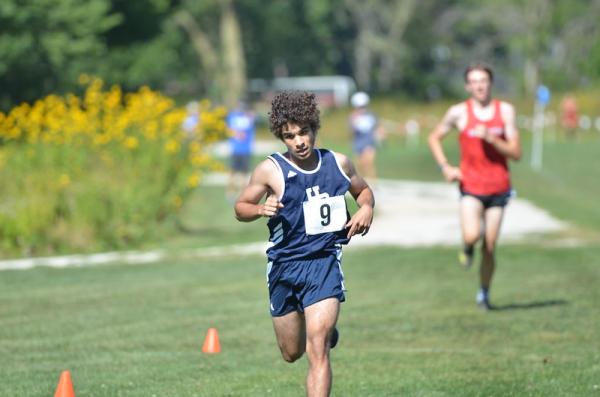 The next HP finisher was freshman Oliver Baterdene. He ran very well with a time of 13:24.9. Freshman Connor Edelstein was hoping to break 14 minutes in this race and did so with a 13:52.4. He showed that the hard work he put in this summer is starting to pay off. 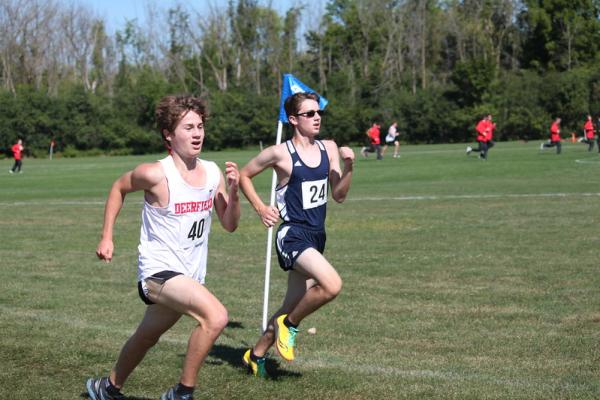 Sophomore Santiago Pozo ran a 14:16.1 with a strong finish to hold off a Deerfield runner at the end. These young runners raced tough and will continue to improve with consistent work the remainder of the season.

The final race of the day was the second Open 2 Mile. Freshmen Andrew Kern and Jack Marcus had good starts to the race going out in 7:38 and 7:42 for the first mile. In the second mile, they missed the turn due to nobody there to direct them and ended up having to backtrack and run quite a bit extra. It will be nice to see them run an accurate race to show how much they have improved. The race also featured some good pack running led by sophomore Ramey Heimgartner with junior Ethan Nicolaz-Davidson and freshman Nate McDonagh. They went through the mile within six seconds of one another. The final mile saw Heimgartner lead them in with a 16:48.2 followed by Nicolaz-Davidson close behind him in 16:52.8. 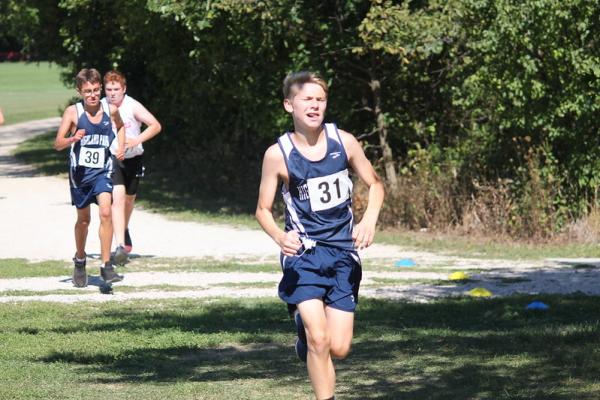 McDonagh came across the line in 17:46.3 after going out 1 minute and 6 seconds faster in the first mile than what he ran for his first timed mile at the start of the summer! Great efforts by all in this race. 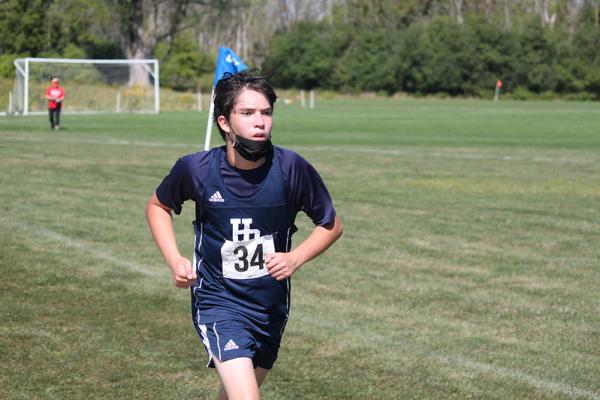 The team was able to get a solid performance to begin the season and is looking to improve on a good start. It will continue to take consistent training to improve and get back to the level of teams like Barrington and Deerfield. The team has a talented and hard working young core that over time could become one of the best teams HP has seen. Right now the focus is on making the most of the opportunity the team has been given to compete this season. Big things still to come for the Giants!